Looks like we humans have been fascinated by our own hands for at least 40 000 years. 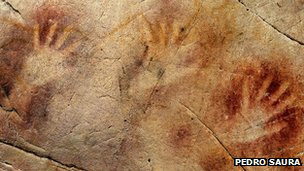 The “Panel of Hands” in El Castillo, Spain is now dated as one of the oldest paintings by humans in the world.
Painted over 40 000 years ago these hand stencils were formed by blowing paint against hands pressed against the wall of a cave.
Nobody is really sure who made them – Neanderthal man who had been living in Europe for a while, or our ancestors, Homo Sapiens, who were only just coming into Europe at the time.
We discussed these prints recently in a call with Richard Unger on Famous hands. Richard pointed out something really interesting:
the pinkie fingers on these hands are very long. Much longer than on the hand prints of more recent cave art.
This indicates that these early humanoids (whoever they were) were cleverer than the later groups who recorded their hands.
Hmmmmmmmm….fascinating.