God has been washing cows virtually non-stop in Switzerland for several days now. They’re all squeaky clean again and they’ve been given their bells back.

Which is probably why you haven’t heard that much from me recently – my brain is busy being re-tuned for summer.

Offline I’ve been exploring topics related to deep democracy and how to get all your sub personalities pulling in the same direction.

Actually what has really been going on is that each of my sub personalities has been trying to write this article all on its own, from his or her very own point of view, so I’ve got several different drafts going on with apparently no common thread.

I guess the main issue is cows and carts and how we humans often have these things back to front without realizing it. And how this explains why sometimes the cart doesn’t depart even under severe pressure.

I think the person who understood cows and the universe more than anyone else on this planet was Gary Larson. My favorite Larson cartoon of all time is the one of a cow couple in their living room.

Do you know it?

The ‘husband’ cow is sitting in front of the TV nursing a beer. The ‘wife’ has a string of pearls around her neck and is standing, gazing longingly out the window. They obviously have a very cozy home with all the usual trimmings. But she has just said to him: ‘Harold, I am not content!’
Naturally the poor fellow has a look of perplexed horror on his face.

I think this cartoon pretty much sums up life on this planet for we humans. We think we’ll be happy once we have x or y or z. And then when we actually get it, oops, maybe this wasn’t what we really wanted after all because we still feel the same.

Luckily we have a few wise souls around who’ve apparently achieved total detachment. What this actually means is that they finally had enough of all the pushing and shoving to stand back at last and take in the whole scenario from a distance.

From where they’re standing it’s pretty obvious we’ve got things back to front in more ways than one. This is what they’ve been trying to tell us all these years but most of us just won’t have it.

So how have we got the cart before the cow?

Here are 5 ways I know of. Each can stop your cart dead in its track unless you turn the whole thing the other way round.

The first is to do with making happiness conditional. We think we first have to do something/succeed (get a divorce, whatever) then we can be happy. Actually it’s the other way round. Happiness precedes success. You can be happy right now instead of first waiting for the cows to come home. And more likely it will cause them to want to come home because they’ll sense your good vibes.

It’s hard to admit that we have total choice over our emotions. All we actually have to do to change how we are feeling is make another choice.

I remember the first time this dawned on me. It was about a zillion years ago when I was a young student sitting in the library cramming for an exam in abnormal psychology. The more cases I read the more depressed I got. I was pretty sure I had every single one of those terrible mental conditions described in the textbook, including a simple personality! Eventually I could take it no more and I went off to drown my sorrows in the student canteen. At the entrance there was a photo display of a squatter camp in Cape Town called Crossroads. I was absolutely shocked by the photos. Not because of the squalor or poverty but because everyone looked so happy! These beautiful black and white photos of joyous smiling faces on people who owned absolutely nothing cured me in a flash of about 100 different conditions of schizophrenia, psychosis, various manias etc. I was deeply humbled and grateful at the same time. There was nothing wrong with me or my life whatsoever and I chose to be happy instead of sad from that moment on, just like the beautiful people in the photos. Byron Katie’s book: Loving What Is, is a good resource for this technique.

Something similar is putting your whole life on hold until X or Y happens. The next time you blink you’re in a rocking chair wishing you’d lived your life instead of just intending to.

Thirdly, is the idea ‘seeing is believing’. Apparently we have this completely back to front and even scientists, whose credibility hangs on this premise, are beginning to come round to the possibility that actually the opposite is true: believing is seeing.

Fourthly, is the idea that making mistakes should be avoided. We think we need to be perfect before we get the show on the road. In fact it’s the other way round, practice makes perfect. You can’t improve without feedback and you can’t get feedback without practice.

Number 5 is the one that really blows my mind. This is called Ho’oponopono. Basically what it means is that whatever your husband says or does (or even thinks!) really is totally and absolutely all your fault!! Well, I’m kidding, and I’m not. Ho’oponopono is the Hawaiian code of forgiveness.

Have you ever heard of a guy from Hawaii called Dr Len? Apparently he cured a whole ward full of dangerous criminals just by working on himself, deciding what part of himself each of these criminals was reflecting and saying ‘I love you I am sorry.’

Everything that shows up in your life is a fragment of you. The more you change in the inside the more this is reflected in the world and people around you.

I think the best way to understand this whole situation is to think of a hall full of mirrors. If you don’t show up yourself, the hall will be empty.

As soon as you reach out, then so does the whole hall/ world that surrounds you.

Cart before cow? We usually think it works the other way around. If someone else loves and supports me then I will to.

How can hands help with making your cart go forwards?

Your hands are the interface between you and the world. Think of them as your rear view mirrors. If you can see a cow in them you’re facing the wrong way (only kidding!)
Your hands are mirrors and they can show you when you’re busy putting your lipstick on your eyebrow instead of slightly lower down.

Now why didn’t you tell me sooner it was a horse’s behind I should be looking at and not a cow’s? Don’t tell me this is all my fault! I already know it!
; )

What do wrong way round carts look like on hands?

They look just like little carts but from an aerial perspective. Boxes!!

If you have a box on your heart line under the middle finger
this means you feel like you’re in a logistic logjam,
boxed in by the details of your every life.
If you have cross hatching inside this box then the situation is much more extreme.
Time to have your hands read! Find out how here 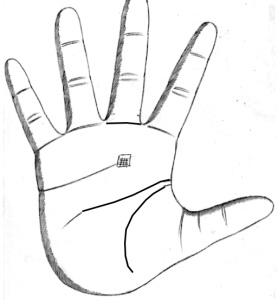