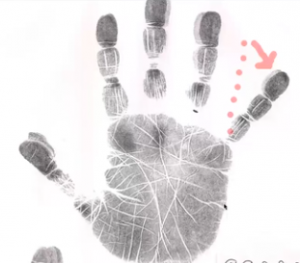 “The opposite of talking isn’t listening. The opposite of talking is waiting.” Fran Leibovitz
😉
Hold your hands up in front of you with the fingers relaxed. Now look at your fingers, particularly the little finger.
Is it standing up straight, supported by the palm underneath it? Or is it standing slightly apart from your other fingers, perhaps even so far apart that it looks as if it is toppling off the edge of a cliff?

The little finger, also called the Mercury finger, is all about communication.
When the little finger starts to move off on its own, this is sometimes interpreted as indicating feeling isolated, or relationship difficulties or independence of thought. But what it really means is an unwillingness to listen to others or take in new information beyond one’s own preconceived ideas. This is the root cause behind feeling isolated or having relationship problems, and also the downside of having a fixed opinion.

According to spiritual teacher Thomas Huebl, there are 2 types of listening: The masculine principle (focus) and the feminine principle (taking the other in). Allowing the other person and their idea’s to land in you and being able to feel and respond them fully.

When the pinkie finger goes off kilter this indicates that the feminine side of one’s listening capacity needs rehabilitation.
This could apply to not listening to other people or your own inner voice.
What to do?

Practice new mind, or “no mind”. Listening afresh each time as if for the very first time. Listening with your whole body. Not just listening for the next gap in the conversation where you can say more. This allows emergence and unfolding, totally new and perhaps even surprising information to come in inspired by shared presence.

Or as Lao Tzu says,
“Empty your mind of all thoughts. Let your heart be at peace.”
“He who defines himself can’t know who he really is.”

Here’s a short video clip of Richard Unger, talking about the toppling pinkie finger (Mercury finger) during a recent hand analysis class in Earthuni. The reason I love talking to Richard about hands is because he explains his logic.

Richard is the genius behind scientific hand analysis and the teacher of all other certified hand analysis teachers. If you would like to learn directly from him, access hundreds classes we created together here.

At the moment we are exploring the chakras in the hands and, in another series, the soul psychology theme, “Is anyone listening to me?” Our next class explores both these topics while honing your client communication skills. In this class we see Richard in action, talking to a client about the markers we are busy studying. You may submit your own hands for analysis. Also, I invite in people who have the markings we are busy discussing so that students can learn appropriate ways of communicating about markers in an empowering way.

Feedback from a participant about the new client communication series:

“An instructor can talk all day about technique and philosophy, but for me, Richard the teacher never shone so fully or penetrated so deeply. It’s like the difference between reading about music and just being swept up by great music.” Kathlyn Phil