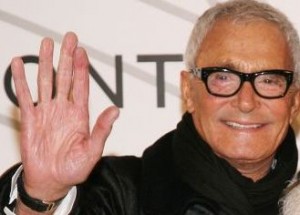 Farewell Vidal
They called him “the man who changed the world with a pair of scissors”.
His creativity and free thinking liberated women from curlers and endless hours under the hairdryer.

What do his hands say?
He has an Air hand shape type with a long ring finger which indicates that he was an analytic yet also Apollonian type:
highly creative and interested in display, being favourite, and being seen.
Look a little closer and you’ll notice he also has a very long pinkie, indicating he was quick sharp and clever. (Mercurial)
Mercurial plus creative – what a powerful combination.
The gap between his head line and life line shows he was an independent thinker – able to break with tradition.
It’s possible he also has a Simian line but it’s hard to determine for sure from this image.
If so, this indicates intense focus. Which certainly was the case.
His index (Jupiter) finger looks damaged. I asked Richard Unger what he thought about this and he said,
“I am guessing that somewhere along the line he rose high then fell hard.”

Thanks Vidal for your courage, your care and for living your incredible flair.
Farewell.