Tips from hands on responding to social expectations

She sat on top me and, ignoring my screams and pleas, plucked at the thick wild hedge that ran unbroken across my face, more or less where my eyes should be. She was merciless and didn’t give up until she’d tamed it into thin twin arches, each swooping dramatically above an eye. (They looked a bit like a flattened version of the McDonald’s logo.)

She also shaved my legs.

I felt violated and abused but at the same time curious about this new being peering out at me from the mirror. Who was she? How could someone be transformed so utterly and radically by the removal of a few hairs?

This was my first experience of shape shifting.

Suddenly boys looked at me differently. I wasn’t on the same side any more.
This was the start of a disco bopping period for me where a young girl could easily tag along with her 18 and 20 year old sisters. By 17 I was cured. I’d witnessed the devastating effect of drugs, sex and alcohol simply by watching the trajectory of some of my sisters’ friends.

I turned into a book worm and joined the Women’s Lib movement on campus.

Having no bra to burn, I rebelled against my sister and society by growing back my eyebrows and leg hair.

Once during this period, someone’s 8 year old son checked me out for some time, his eyes flitting backwards and forwards between my face and legs. Eventually he gave up and simply asked: Are you a boy or a girl?

I acted nonchalant, but that very night went back to shaving my legs. How could an 8yr old boy whip me into line when even professors had failed?

Something similar happened in Vanuatu, years later. We were on the island of Tanna visiting a village on the slopes of an active volcano.

Our guide was a tall, exquisitely built ebony black man, dressed in nothing but a plaited banana leaf wrapped snugly round his penis (colloquially called a ‘numba’).
He looked me up and down (I was probably in shorts as usual). Then he dropped his bombshell:

‘How many chillun you gat?’

When I answered none, he sucked this information through his teeth, spat out the lump of kava root he’d been chewing all day and suddenly lost all interest in me. As a childless woman, I’d just been relegated to the rubbish dump of his society.

I swear my son Jules is all this man in a numba’s fault. He planted a seed in my brain that simply wasn’t there before. (Maybe I’ll go back to Vanuatu one day and claim alimony!)

Jokes aside, social contempt is a deadly weapon. If you did a head count you’d find it responsible for far more devastation than the atom bomb.

What has all this to do with your hands?

Changing or stopping yourself because of what others say or think shows up in different ways in your hands.

If you’re completely out of your own movie you’ll have a co-dependency line.
If you’re blocking yourself through concern about what others might think, you’ll probably have one or more Apollo attack lines.
What attack lines look like? They all come out of the Mars zone and indicate repetitive thoughts, going directly to whatever you are busy torturing yourself about. 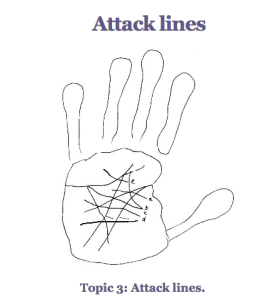 For example, stress regarding your intimate partnership or lack thereof and so on..
(If you’d like to learn more about these lines, take classes here. )

Several markers under the ring finger are related to reputation fears. My Apollo class, discusses the differences between these various markers.

If you have a star like formation on the end of your headline this is called “desire pollution”. When this marker shows up it indicates that you can’t tell your genuine wants from other people’s wishes for you. To see what this marker looks like see image to left. 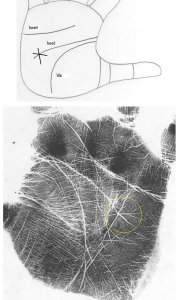 The best way to figure out what your real wants are is to get clear on what you really value in life. If your wants clash with your values, chances are they are not your wants but someone else’s.

Read a related post on values here: Is your life in danger of being hijacked?

I’m off to South Africa in a few days. I’ll be writing a separate post about my SA agenda later.

Wishing you a happy week,
Jena

PS: If you’d like to learn more about hands and how they can help you transform your life and the lives of others, join my online hand analysis classes whenever or wherever you are in the world.

To have your hands analyzed wherever you are in the world, go here.

back to earlier blog archive