I’ve just spent 10 days in the bush exploring foot prints instead of hand prints.
Fascinating how much one can tell about what’s going on just by looking at a few imprints in the sand.
Just like hand prints you can get a pretty clear picture of what’s going on. 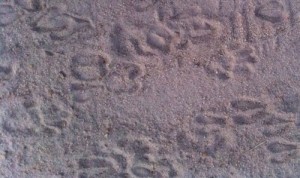 As the prints reveal, here’s what was out and about.

So while on the subject of footprints, I thought I’d show you something equally fascinating

– the foot print of a well known Hindu monk.

I was surprised to see the beautiful whorl on the ball of his foot. Apparently the Buddha had this marking too. 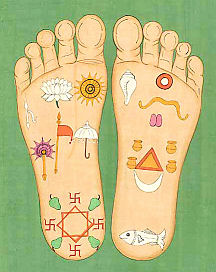 What does it mean?
I have no idea but here is a theory from India:
It is regarded as a spiritual symbol is both Hinduism and Buddhism and it is said that Lord Krishna had them on his feet (see above) and often statues of the Buddha are depicted with them if he is in lotus posture with the soles of his feet turned up. It is said to be found on the feet of spiritually evolved people.
We don’t tend to explore human footprints in the West as much as is done in warmer climates.
So?
Don’t just sit there.
Take off your socks, stockings and shoes and explore yet another unexplored facet of your soul/soles…
🙂
Who knows, maybe you have one too.
(Thanks to Benjamin Pinardi for these images and the information about the meaning of foot whorls in India.)