According to Richard Unger, virtually every marker under the ring finger (Apollo) has something to do with reputation fears or what he playfully calls “tomato fear”. For example, a doubling of the heart line under this finger (see blue line marked below).
Or more commonly, attack lines running diagonally from the Mars (God of war/fighter) area of the hand across to anything that’s under attack. In this case, the heart line under the Apollo finger. (see red lines below). 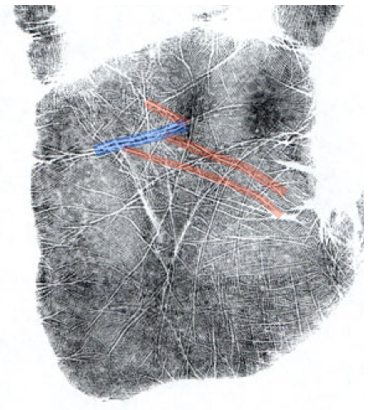 When these lines appear it’s important to look at the exact place where the line ends as this indicates precisely what is under attack.
Perhaps what’s under attack it is a talent line, indicating that the person has a tremendous talent that’s currently on ice due to fear of what others might think or say if it were lived more fully.
Even the Apollo star (a rare gift marker) is made up of 2 parts tomato fear.

The challenge?
To use this fear to achieve excellence rather than to stop oneself entirely.
The trick is to realize the illusion. The real tragedy is this: the tomatoes that stop us in our tracks (and put dazzling careers into mothballs while still just a twinkling in their owner’s eye) are mostly imagined rather than the real thing.
Most people sitting in rockers today, looking back on their lives, wish that they had worried less about what other people thought when it really mattered. They mostly regret what they didn’t do, rather than the opposite.
So?
Feel the fear and do it an way. Your hands can help you find the courage.
You have three different sources of support

– your real friends – seek out a group of supportive friends who encourage you to step beyond your comfort zone
– your personality strengths (your inner allies) – get them working together rather than against each other.
– your “great friend” or higher self. That which calls you to become all you can be. (This is visible in your fingerprints.)

But what if this is an even deeper need to hide, with roots beyond mere family or society?
This is what we’ll be discussing today during our monthly topic call with Richard Unger – right Apollo life lesson.
we’ll be exploring how to uncover another layer of the great friend, your exalted life lesson.
More about this call here.

10 thoughts on “Is your reputation in danger? Or is it fear of rotten tomatoes?”