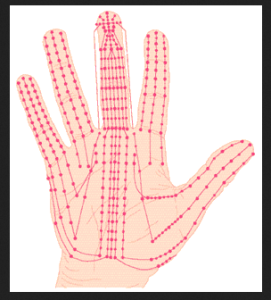 In order to understand any line formation in your hand, it helps to have a general overview of the electromagnetic forces at play behind the scenes. This gives you an understanding the basic principles of how these forces operate, helping you see any individual line within the context of what’s going on in the entire palm.
One way of interpreting the lines on your palm is to see these lines as being pulled or influenced by different forms of energy that run through the meridians in your body and into your hands. (see image to left)

Your hands show where you are putting your energy and focus. A different type of energy runs up through each finger, shaping the finger length and both forming and pulling on the line formations under it. So too with other parts of the palm and fingers.

Bearing this in mind, it then helps to imagine these forces as pulling on the lines on the palm. Almost like the way iron filings get pulled by magnetic forces. The electromagnetic forces are there, but not visible to the naked eye.

For example, the index finger is named after the Jupiter energy that runs through this part of the hand (after the Roman mythological king of the gods, Jupiter in Roman mythology or Zeus in Greek mythology. Jupiter themes are leadership, ambition, authority, status, holding a vision.)
The middle finger refers to Saturnian energy (after the old god Saturn/Cronis. Themes: time, order, systems, value, responsibility, discipline).
The ring finger is associated with the archetypal energy of Apollo. Themes: attention, display, showmanship, creativity).
The small finger refers to Mercury/Hermes mythology. Themes: communication, Mercurial wit, cunning.

Within the palm itself, the Mars zone (god of war) relates to courage and other warrior qualities.
Venus/Aphrodite relates to attraction, play and delight.
The moon (Luna) to imagination, intuition, inspiration, spirituality.
The Pluto zone to transformation. And the Neptune zone to deep emotions such as rage and grief.

Likewise, lines running up to the middle finger indicate responsibility and carry through. “Getting the job done”. (Saturnian energy)
And so on with the other archetypal energies running through each finger.
In the same way, Mars (god of war) energy exerts a powerful force, creating lines in the hand radiating from that region.
Lines originating in the Mars area (or pointing to/from that direction) are called “Attack lines” or “opportunity for growth” lines and where they end indicates precisely what is under attack. Sometimes these lines are broken, almost like stitch work, they disappear and then reappear, always in the same direction (pointing towards/away from Mars). Attack lines all start in the warrior (Mars) zone inside the thumb and go to what ever is under attack.
For example, the green lines in the image above are all Apollo attack lines indicating a fear of criticism/what other people think/”fear of tomatoes”(fear your reputation may be under attack).
So too, an attack line that goes directly to the point of intimacy on the heart line is called an intimacy attack line (red line here.)
For more on attack lines see my foundation class on this subject

Occasionally lines get pulled by more than one force.
For example, an Apollo line indicates creative urge. This is usually indicated by a straight line under the Apollo finger. On rare occasions this line curves, as if pulled by the moon. An Apollo line that curves in towards the moon is called a “Talent line”. And even more uncommonly, it curves above the heart line, as if pulled by Mercury energy. Indicating perhaps “inspirational talent or creativity”.
Here’s an example of this.


The blue lines are are Apollo attack lines (reputation fear) because they are associated with Mars/warrior energy reaching out to the Apollo region.
The purple line is an Apollo line that is also being pulled by Mercury energy.
This particular hand print was submitted by a student during a recent interview I did with Richard Unger on the Philosopher hand shape archetype.
Richard’s comments on this line were that Apollo lines virtually never curve like that (towards Mercury) and that it probably indicates some form of inspirational creativity/Mercurial creativity. (page 7, 30 minutes into call 2)
Interestingly, a few days later in a Facebook post, a hand reader from a totally different system of thought suggested that a specific Apollo attack line was a line of inspiration. But in the same hand, there was a similar rare curved Apollo line like the one above, curving off it’s normal course above the heart line. So, in my view, if the person did express inspirational creativity this quality was being associated to the wrong line formation.

The point I’m trying to make here is that, without understanding the 7 or more basic underlying energetic forces, and how they influence hand shape and line formation, hand analysis simply wouldn’t make sense and would be reduced to folklore.

My next post will be on Apollo stars. I thought I’d post this background theory first, because the 6 spurs within a star formation are caused by 3 or more of these underlying forces.

9 thoughts on “Understanding the lines in your palm”