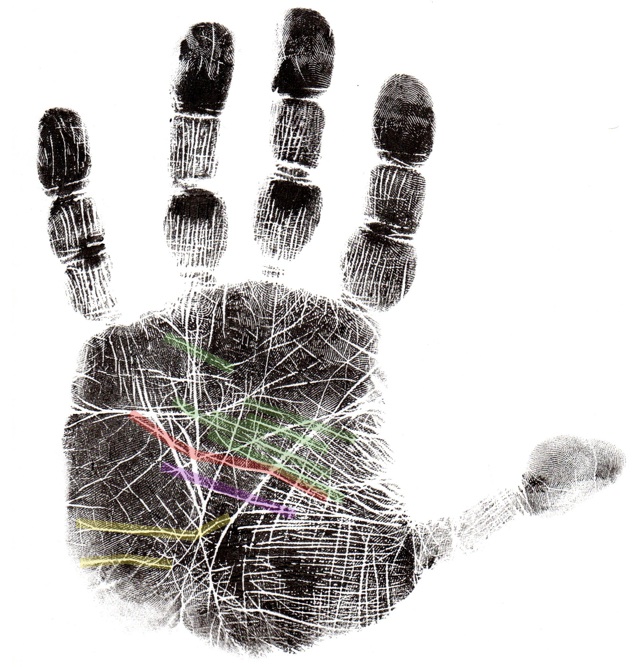 Think of your hands as mirrors reflecting your depth and beauty and also where you might be getting in your own way. Hands speak eloquently and precisely about whatever it is you need to address. For example, sometimes we get stuck in a loop of negative thinking. Our hands are immensely useful in this regard because some of these repetitive loops are played so often that they eventually show up as a line formation on your palm. (Neurons that fire together wire together?) When this happens, hands help us get out of this loop by increasing our “response-ablity”. We see the line formation, connect the dots backwards and then next time the pattern runs we’re be able to see it, self reflect, then pause, and hopefully make a choice to respond consciously rather than simply react in a knee jerk way. Each time we do this we consciously break the loop and this empowers us, reminding us again and again we have a choice here.

How can lines in the hand indicate patterns of negative thinking ….and what to do?
Beyond the three major lines on your hands there are many other finer lines running vertically towards the fingers and others running horizontally across the palm. These lines change quite a bit over time. They grow in or get stronger or sometimes fade. The theory that the vertical lines indicate what you are saying “yes” to, whereas the horizontal lines on the palm and fingers are thought to indicate whatever you are saying “no” to was first proposed by Richard Unger who later took the idea further by identifying a number of horizontal lines that all fan out from a region from a region of the palm just inside the thumb, called the “Mars” region (after the God of war in Roman and Greek mythology). Richard theorized that, from a meaning perspective, they all behave in a similar manner. His thinking: the Mars region if well developed, represents stamina, courage, testosterone and warring or warrior tendencies, and also a desire to protect others or fight for a cause. Any horizontal lines that fan out from this region and crossing the life lines into other regions of the hand include both strong and faint lines, that sometimes look like stitch work, disappearing then returning, while going out to whatever is “under attack”. Unger calls these lines, that all originate in the Mars region or point back to Mars “attack lines ” or more positively, “opportunity for growth lines”. His theory being that these lines all go from the warring/Mars part of yourself directly towards whatever region is under “attack”. In other words, what are you at war with internally, perhaps thinking and thinking about endlessly by not bringing your thoughts to resolution through dialogue with others? What negative thinking loop is running? Identifying that there’s a pattern running represents an “opportunity for growth” because you are effectively bringing to consciousness the fact that you are at war with yourself. Inner turmoil can only be dealt with once it’s brought to your attention.
Some of these lines end under the ring finger, also called “Apollo” in Greek and Roman mythology. Apollo was concerned about appearances and these lines are thought to indicate reputation fears or worries about performance or what others think of your creative endeavors. Some of these lines go directly to a point on the heart line that’s thought to represent the person’s intimate partnership. Lines that end at this spot are believed to indicate negative thinking about your intimate relationship or lack thereof. Some of these lines end in a region thought to be related to introspection and radical transformation. These lines are thought to indicate false power: frustration, blame or anger about thwarted ambitions; not being all you could be, and running a negative feedback loop that includes blame projected onto someone else, or feelings that you’ve been held back somehow.

A new way to work with repetitive thinking loops?

Recently I came across the work of Richard Schwartz, founder of IFS (Inner Family Systems) and then saw him again in action helping someone do the work required to break one of these cycles. In this case the repetitive loop was a panic attack and his inquiry and dialogue with the parts was deeply transformative. I am really excited about his work because it resonates deeply with the way I talk about hand markers, not only the “inner family” of personality parts but more particularly Schwarz’s concept of the Self which is universal. I think the next step after a hand analysis session would be to take yourself off to an IFS practitioner to work with all the players identified in your hands. The problem with identifying hand markers is always, “knowing what we now know, what can we do about it?” Thanks to people like Sanaya Roman, Genpo Roshi, Debbie Ford and many others who also use multiple personality models of the psyche, both Richard Unger and I have been talking to clients about realigning inner teams for decades and inviting them to notice one part of themselves being locked in the cellar by another part, but Richard Schwartz takes this work to another level by bringing a deeper understanding and methodology of how to work with these parts in a transformative way, where parts are enabled to give up one role for another more enabling role. This could be an interesting skill set for hand analysts to learn, to help clients towards further actualization of their potential. For example, Schwartz talks not only about “exiled parts” but also “protectors” and “fire fighters” who, once freed up of their current role, can assume new roles. This could be a new way to think of each of the “opportunity for growth lines” that originate from our “protective” Mars region of the psyche. These could be thought of as a protective “inner family member” that keeps another exiled part locked up because at one point in the distant past this was necessary for the protection of that part. This makes sense because opportunity for growth line formations are often found in tandem with talent indicators. For example, an anger line sometimes creates a formation called “desire pollution” that is often present when a person has a talent indicator for leadership. The desire pollution marker indicates a state of numbness (that knocks out or sends the anger underground) due to over-awareness of everyone else’s desires. This desire confusion can potentially sideline a person’s leadership capacity for decades.

I’m looking forward to playing with Richard Schwartz’s IFS model in my own internal landscape, exploring the possibility that the “protectors” could take on more positive, perhaps bolder roles. And also that they can be persuaded to give up old roles that are no longer relevant to the Self. Til now, I’ve invited people to activate their “inner warrior” if their hand reveals Mars strengths but never thought of this as a potential new role for the part currently serving as an attack line. Two parts get freed up when one part sees that it no longer needs to protect an “exile” (for example the exuberant playfulness of a gifted child) by locking it up.

What are your inner team players? Your protector parts and exiled parts? And what’s your opportunity for growth?

If you find this topic fascinating and you’d like to explore it further come and study hands with me. The next intake of students opens 14 September for the coming year. There’s an intensive course for beginners with lots of personal mentoring to give you a head start. Register here for first class free.

More about opportunity for growth lines
The Abyss line

Also belonging to the same category of line formations but not shown in the first two images above, the Abyss line is thought to be a depression indicator. The “Abyss line” is usually made up of lots of tiny line fragments, like stitch work all going from the Mars (warrior) region inside the thumb towards the middle finger.
It would be interesting to think of this line as a protector part of oneself according to IFS system. Which exiled part of the psyche would a Saturnian protector part wish to harbour by sheltering it at the bottom of a deep abyss?

Here’s an image of an attack line going to the point of intimacy on the heart line. 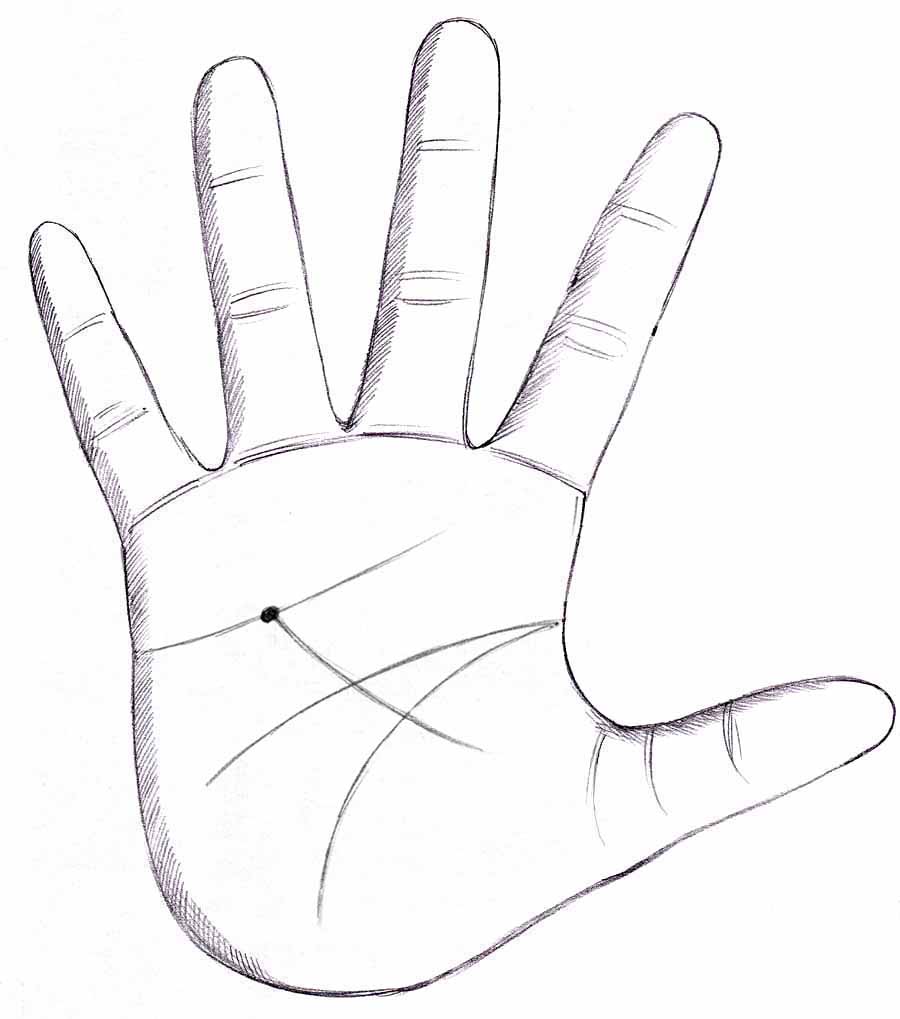 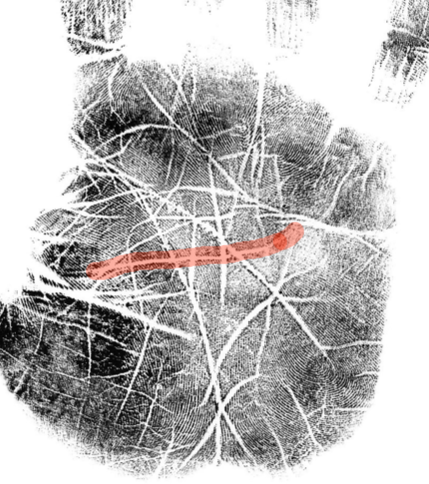 A Mercurial protector line indicates a need for more communication. (Mercury or Hermes being about communication.) To what extent is this person listening to their own inner dialogue about their intimate relationship and thereby not being fully present in the moment for whatever is arising?
Is this internal dialogue to do with the person’s core drivers (life purpose/life lesson imprinted in their fingerprints ) or an inner dialogue with some other “internal family” member rather than their actual partner?

Multiple protector lines going to the point of intimacy This image intrigues me because it shows multiple protector (attack or “opportunity for growth”) lines all going towards armoring around the point of intimacy. I find the image intriguing because this person was devoted to his partner for over 60 years. It makes me wonder what he wasn’t communicating, or is it possible that some of these lines are due to an internal dialogue, remnants from an earlier time, to do with his parents’ relationship, or to do with his relationship with his mother who lived with him and his spouse for many decades. Do these lines point to part of himself he feels a need to protect? Intimacy attack line breaking the heart line
Another intriguing image. It would be interesting to know when this formation first appeared on the person’s hand. Was it caused by an event in early childhood or was it already on the palm prior to birth?
Many line formations on children’s hands are thought to relate to whatever is going on in their parent’s lives. 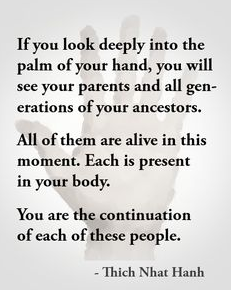 Here’s a related article from a few years ago on anger lines.

And here’s another related article: this time on lines indicating reputation fears/fear of what others think. Also written quite a while ago. I’ll have to review sometime..
To come and play with us while exploring your own hand prints during 1 on 1 weekly hand analysis mentoring join us here.

5 thoughts on “Attack or Opportunity? A new way to work with old patterns”