Venus stars have a different meaning depending on precisely where the star is located on the Venus Mount.
Is it in the Family circle region or in the Second Circle of influence region, or the Inner Child area or in the Missing Mother’s Milk area of this mount?
Or is it slap bang in the middle of the Venus mount?
Most Venus stars have precise meaning that is useful to bring into consciousness or discuss. Often this star provides the ah-ha point of your session that ties everything else together.
Stars slap bang in the middle of Venus are however more tricky and don’t have an exact meaning.
Here’s what Richard Unger, the originator of the Gift Marker theory and with over 40 years experience, says about centrally located Venus stars:
“Stars that occur right in the middle of Venus confuse me. I don’t have a good rule for what to do with them. I know that it’s an explosion in Venus and I have my “Venus Possibilities List” to check every adjective about Venus – from sex energy, to play, to family, to charm etcetera, etcetera, and I have no idea what the star in the middle of Venus is saying. I’m just looking at the entire Venus List and making my best guess based upon the rest of the hand.” (Excerpt from an advanced threading call on multi-gifted hands 30.50 )

(If you look through IIHA year long course material you’ll see that he hasn’t isn’t even listed it among the gift markings.)

Two Venus stars that are far more useful to talk about are the Wounded Child star and the Influence of the Second Circle Star.

The standard Venus star is the Wounded Child star. This is a marker low down in Venus, towards the lifeline. Actually it’s inside the second chakra part of the Venus mount. It’s by far the most common of the Venus stars. 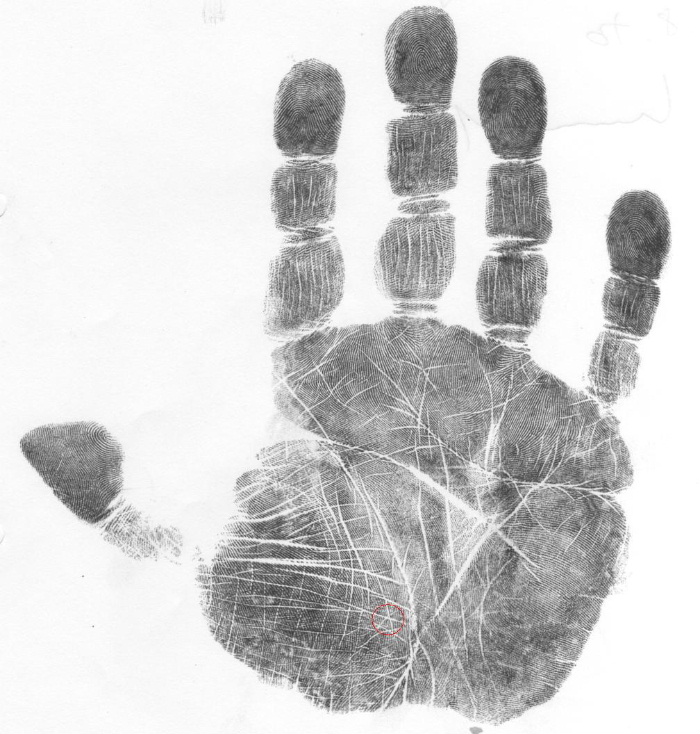 These are particularly important when they jump out you and catch your eye. Sometimes the lines seem to gravitate to this point. As in the image below. This is an abuse indicator. The good news is that people who have this marker have the tendency to rise above their past and help others avoid or heal from similar wounding. 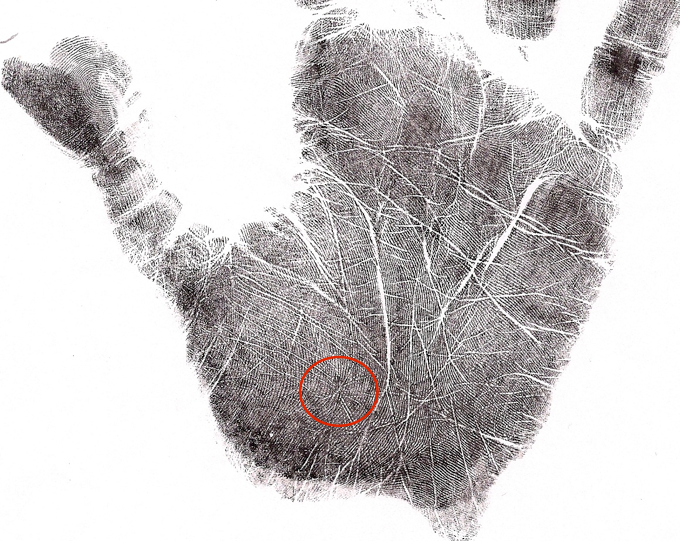 Sometimes there’s a wart on this spot or some other blemish. These are more to do with not taking care of your inner child; not having enough fun.

The Influence of the Second Circle Star is more rare but when it appears it also takes center stage in the analysis.
We’ve discussed this marker with Richard during several Earth School calls. (The links to these calls are at the bottom of this page.)
Here’s Richard’s opinion on this marker:
“The first ripple is the family influence, and this one is the next influence out; close friends that you’ve held over a lengthy period of time. The group that was there for your thirtieth birthday and which ones from that are still around for your fortieth, I am calling your second circle. That is what this star indicates, a strong second circle, a strong circle of friends; could be co-workers or combination of these. It might be schoolmates that have maintained relationship over a long period of time. In general, I consider it a positive marker. It shows support for you.”

(* Venus mount = the entire fleshy area at the base of your thumb.)