A Jupiter Star is a gift marker indicating leadership and high achievement, according to Richard Unger, the man who first identified this gift marker and 16 others.

Sometimes one sees multiple Jupiter stars, or 8 pointed varieties.
These, according to Richard Unger, indicate the capacity to be a leader of leaders.

Only a few percent of people have this marker and even fewer have multiple stars.
If you have a Jupiter star it’s a big deal.

As with all star formations ask yourself:
What lines make up the star?
Are any points missing? If so, which?
What quadrant of the Jupiter mount is the star positioned in? This indicates what type of leadership.

The shadow side of the Jupiter star appears when these qualities are not fully owned and occupied.

The danger?
You’re built to take a leading role but instead of finding your own throne and sitting on it, you help someone else by playing second fiddle.
You take a supporting role in someone else’s mission.
The problem is, often this other mission is not your mission nor your purpose.
Then you’re in danger of losing the spark in your eyes.
You’re succeeding at the task but it doesn’t feel satisfying.

Jupiter star on a sunny day:
you have found your own particular throne and are sitting on it.
– the project resonates with and is driven by your purpose and passion.

Shadow scenarios:
• A constant feeling that one is underachieving, even when this is not the case.
• Attempting to be the power behind someone else’s
throne: president’s wife syndrome.
• Bringing out one’s ambition through another.
• Power plays or giving away one’s power.
• Trying to control the person who is in charge.
• Diminishing oneself to please others.

If you recognise any of these scenarios, don’t feel shamed.
You can’t have the light without the dark, and the dark serves the light
to add contrast and show you what you have.
Instead focus on the sunny side – the magnificence of what you have –
a powerful gift that’s begging you to own and fully inhabit it.

You’ll notice as with any marker, there isn’t just light and dark.
There are two shadow poles.
One is too much of a quality and the other is too little of it.
In this case, power.

This is what Richard Unger calls the “Goldilocks principle” :
too much, too little, just right.

Be gentle on yourself when you err in either direction.
And keep making small corrections. Like an aircraft going from A to B.
90% of the time the aircraft is off course but through small constant
adjustments it reaches its target anyway.

In the hand we discussed during last week’s call, this marker was on a man’s hand
(see image below.)

These days this gift marker is found far more frequently on women’s hands than on men’s. Richard says this never used to be the case when he first started reading hands over 40 years ago.

I find this fascinating.
Why? Is it an indicator of the new spirit sweeping our planet? humanity re-owning its feminine power?

When I work with clients who have this marker in their hands I give them a picture of Imperia. The formidable statue by artist Peter Lenk that stands on the end of the jetty in Konstanz, Germany.
She’s magnificent albeit highly controversial. Full of positive female power, holding in one hand the pope and in the other the kaiser, both wearing crowns. Two little old naked dissatisfied men. They’re in stark contrast to her happy spirit and lythe female vibrancy.

Why do I give them this image?
It’s a good reminder to own and embrace this inner friend. Both the positive and the negative sides of her. 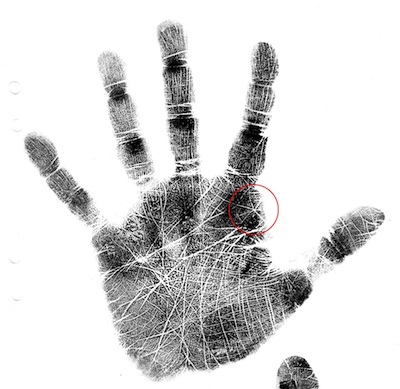 Why listen to what other people have to say about this gift marker?
Why not listen directly to what Richard says?
(Update to post. January 2014: here’s a call with Richard on this topic)

I have a Jupiter star in my hand. Oops!
😉

Like to know more about other gift markings?
What do they mean? How to identify them. What if you have no gift markers?
Download my free report on gift markers here

121 thoughts on “Do you have a Jupiter star in your hand?”